Work > The Ride Back To Black 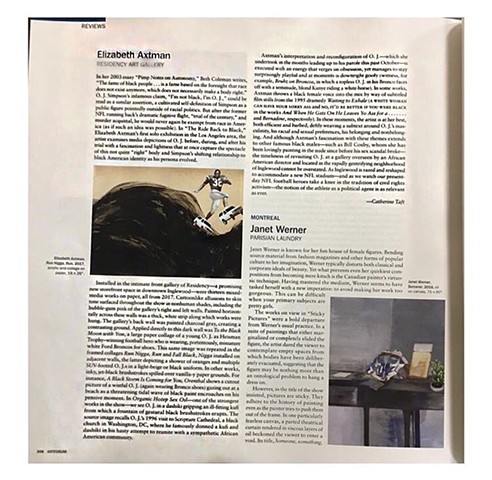 Elizabeth Axtman "In her 2003 essay "Pimp Notes on Autonomy," Beth Coleman writes, "The fame of Black people..is a fame based on the foresight that race does not exist anymore, which does not necessarily make a body right." O.J. Simpson's infamous claim, I'm not black, I'm O.J.," could be read as a similar assertion, a cultivated self-definition of Simpson as a public figure pointedly outside of racial politics. But after the former NFL running back's dramatic fugitive flight, "trial of the century," and murder acquittal, he would never again be exempt from race in America (as if such an idea was possible). In "The Ride Back To Black," Elizabeth Axtman's first solo exhibition in the Los Angeles area, the artist examines media depictions of O.J. before, during, and after his trial with a fascination and lightness that at once capture the spectacle of this not quite "right" body and Simpson's shifting relationship to black American identity as his persona evolved.

Installed in the intimate front gallery of Residency--a promising new storefront space in downtown Inglewood--were thirteen mixed media works on paper, all from 2017. Cartoonlike allusions to skin tone surfaced throughout the show in nonhuman shades, including the bubble-gum pink of the gallery's right and left walls. Painted horizontally across these walls was a thick, white strip along which works were hung. The gallery's back wall was painted charcoal gray, creating a contrasting ground. Applied directly to this dark wall was To The Black Moon With You , a large paper collage of young O.J. as Heisman-Trophy winning football winning hero who is wearing white Ford Broncos for shoes. This same image is repeated in the framed collages Run Nigga Run and Fall Back, Nigga installed on adjacent walls, the latter depicting a shower of oranges and multiple SUV-footed O.J.s in a light-beige or black uniform. In other works, inky jet-black brushstrokes spilled over vanilla-y paper grounds. For instance A Black Storm Is Coming For You, Orenthal shows a cutout picture of a wistful O.J. (again wearing Bronco shoes) gazing out at a beach as a tidal wave of black paint encroaches on his pensive moment. In Organic Hotep Sex Oil ---one of the strongest works in the show---we see O.J. in a dashiki gripping an ill-fitting kufi from which a fountain of a gestural black brushstrokes erupts. The source images recalls O.J.s 1996 visit to Scripture Cathedral, a black church in Washington, DC where he famously donned a kufi and dashiki in his hasty attempt to reunite with a sympathetic African American community.

Axtman's interpretation and reconfiguration of O.J. --- which she undertook in the on this leading up to his parole this past Octobre--is executed with an energy that verges on obsession, yet manages to stay surprisingly playful and at moments is downright goofy (witness for example, Bruhz on Broncos , in which a topless O.J. in his Bronco faces off with a seminude, blond Kanye riding a white horse). In some works, Axtman throws a black female voice into the mix by way of subtitled film stills from the 1995 dramedy Waiting to Exhale (A WHITE WOMAN CAN HAVE YOUR SORRY ASS and NO, IT'D BE BETTER IF YOU WERE BLACK in the works And When He Gets On He Leaves Yo Ass for a....... and Bernadine ,respectively). In these moments, the artist is at her best, both efficient and barbed, deftly weaving a subtext around O.J.'s masculinity, his racial and sexual preferences , his belonging and nonbelonging. And although Axtman's fascination with these themes extends to other famous black males--such as Bill Cosby, whom she has been lovingly painting in the nude since before his sex scandal broke--the timeliness of revisiting O.J. at a gallery overseen by an African American director and located in the rapidly gentrifying neighborhood of Inglewood cannot be overstated. As Inglewood is razed and reshaped to accommodated a new NFL stadium--and as we watch our present day NFL football heroes take a knee in the tradition of civil rights activism--- the notion of the athlete as a political agent is a relevant as ever." --Catherine Taft